There is a saying that you don’t truly enjoy a family vacation until you get to where it is that your family is actually going. I guess the same is true when you travel with a college hockey team. How many family vacations have you had were all of a sudden you hear from the backseat, “Mom, Billy’s touching me!”

While there weren’t any fights on the bus, yesterday was a very long day.

9 a.m. Bemidji – Board the bus for a 4-hour ride to the Minneapolis Airport.

3 p.m.- Finally made it through security

3:30 p.m. – Hockey players are hungry all the time! Twenty-six players start going to their favorite sub shop, favorite Chinese place, favorite whatever restaurant at the airport.

7:30 p.m. – Get a hold of the bus driver to find where he wants to pick us up. As the bus pulls up to the curb, 26 hockey players grab their bags, and start jaywalking to the bus. Just when those 26 players get 10 feet from the bus, here comes one of Philadelphia’s finest.

Remember, we were 10 feet away from the bus ready to leave. By the time the 26 players drag their 50 hockey bags across the airport to the correct spot for buses, we got a phone call from the driver. He tells us he has to go inside the airport to fill out paperwork to go pick us up at the correct spot. Ten minutes later he called back. Now the bus won’t start!

So there are 26 hockey players and five members of support staff: coaches, athletic trainers, equipment managers, and a radio announcer, all waiting on the curb. And waiting. And waiting. Almost 90 minutes after being 10 feet from the bus we finally get on the bus. It probably took us used to Northern Minnesota weather about an hour to go inside to wait where it was warmer! 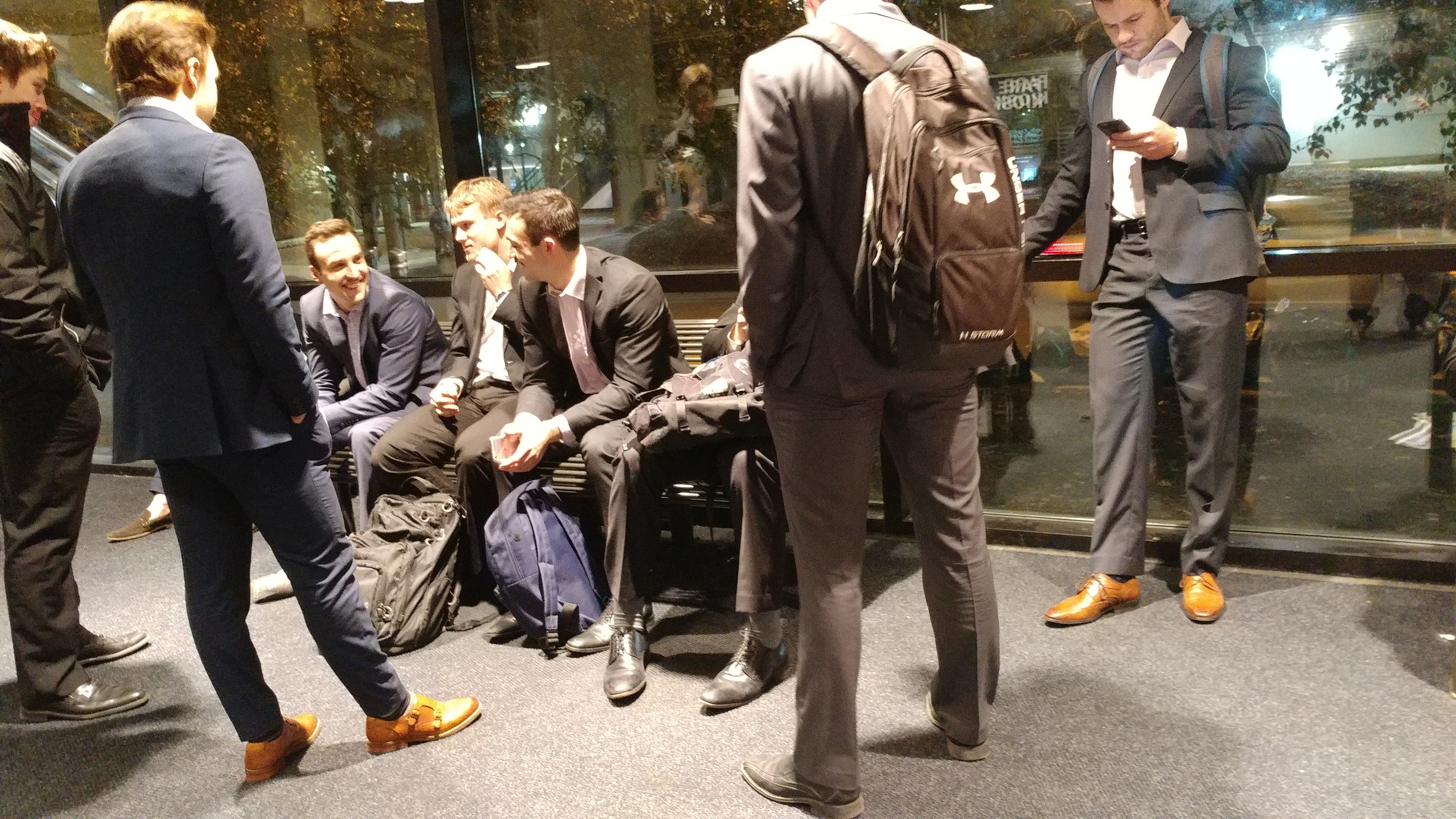 The trip from Philadelphia to Princeton, New Jersey takes about an hour. Quite honestly it never seems like you leave Philadelphia. Urban sprawl? I think so.

Turns out our bus driver had never been to Princeton, New Jersey. It also turns out that Princeton has some very narrow streets, lots of roundabouts, and one-way streets. We got lost about 4 times headed to Baker Rink to drop off the equipment. More on the rink tomorrow. Then, we got lost about 3 times on the way to the hotel. Check-in time 10:20 p.m. Eastern Standard Time.

While there weren’t any “Am not, are too,” moments on this trip, 12 hours from start to finish is a bit tiring. Some of the players went right to bed. Some players who were hungry again found more food. Your radio announcer went to the Hotel bar for a cold one.

As it turns out, the hotel bar was a hang out of Albert Einstein. Einstein moved to Princeton in 1933 where he lived until he died in 1955. Einstein’s former classroom at Princeton has been turned into a museum, virtually untouched since he left the school.

On the walls at the hotel bar were pictures of many famous Princeton graduates. Woodrow Wilson went to school here. As did James Madison. So did Michelle Obama, Brooke Shields, David Duchovny, James Stewart, F Scott Fitzgerald, FK, Ralph Nader, several members of the Forbes Family, Ethan Coen, Lee Iacocca, and many many others.

9 a.m. – The team had a wake-up call and then breakfast on their own. There’s a restaurant here at the hotel, and about 20 other places within a couple of blocks.

I’ve seen hundreds of practices over the years, so I didn’t attend this one. I started editing audio and video for the week, ran through my flashcards of Princeton players and jersey numbers, then found a place for lunch.

12:30 p.m. Our hotel is located at the Princeton Square. Classes were done for the week at Princeton at 10 a.m. this morning. You would think that the campus would be empty. It was anything but. Walking out the front door of the hotel leads you to the entrance of the school. The school boasts 500 acres of property, and 26 Nobel Prize winners. 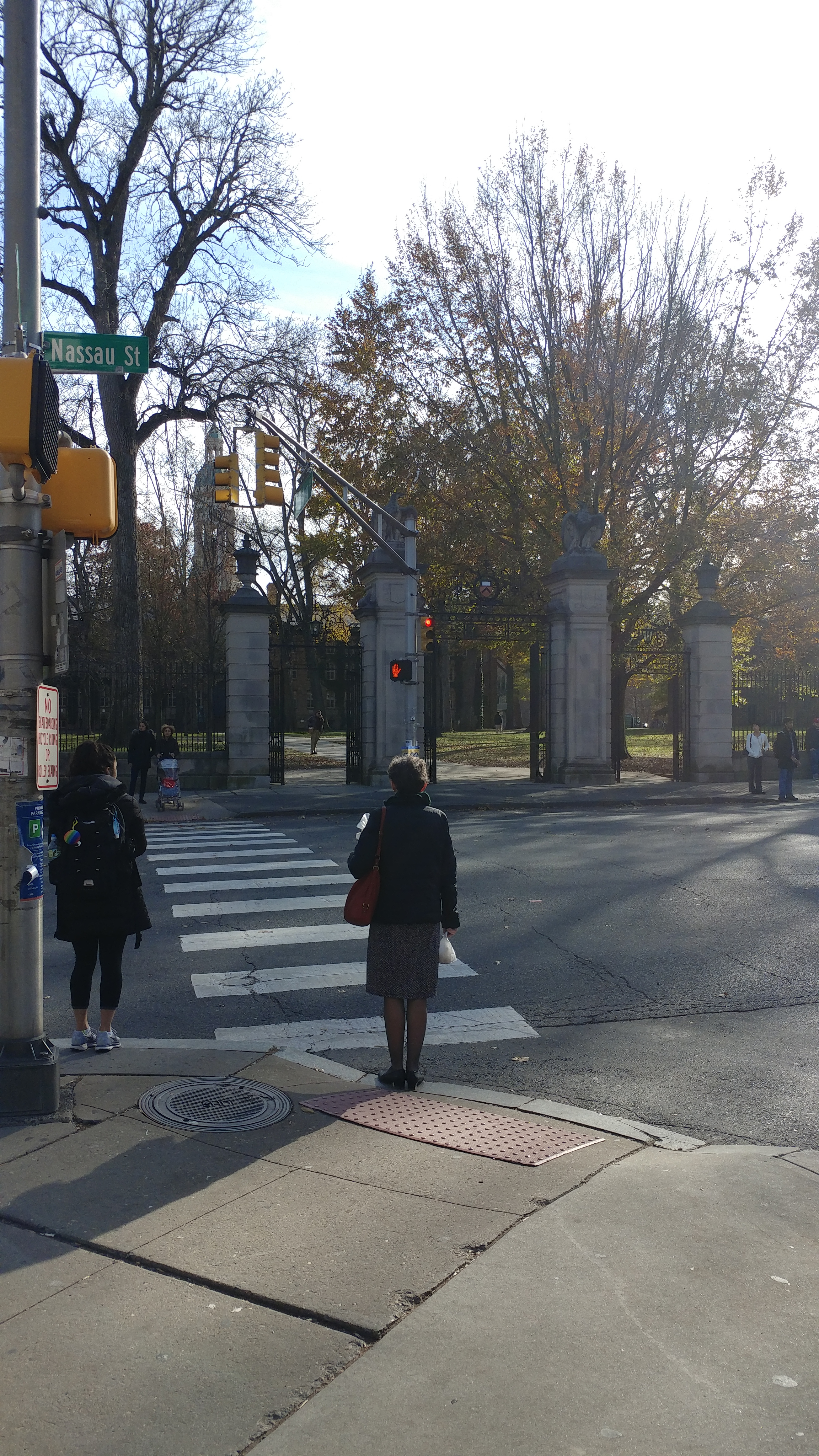 Just down the street from there are a couple of sandwich shops, a pancake restaurant that also served Mexican food (too strange of a combination for me!), and a place called 30 Burgers. That’s my kind of restaurant.

I settled for the Gyro Burger… ground lamb and ground turkey with grilled gyro meat… and of course feta cheese and tzatziki sauce. Very tasty. 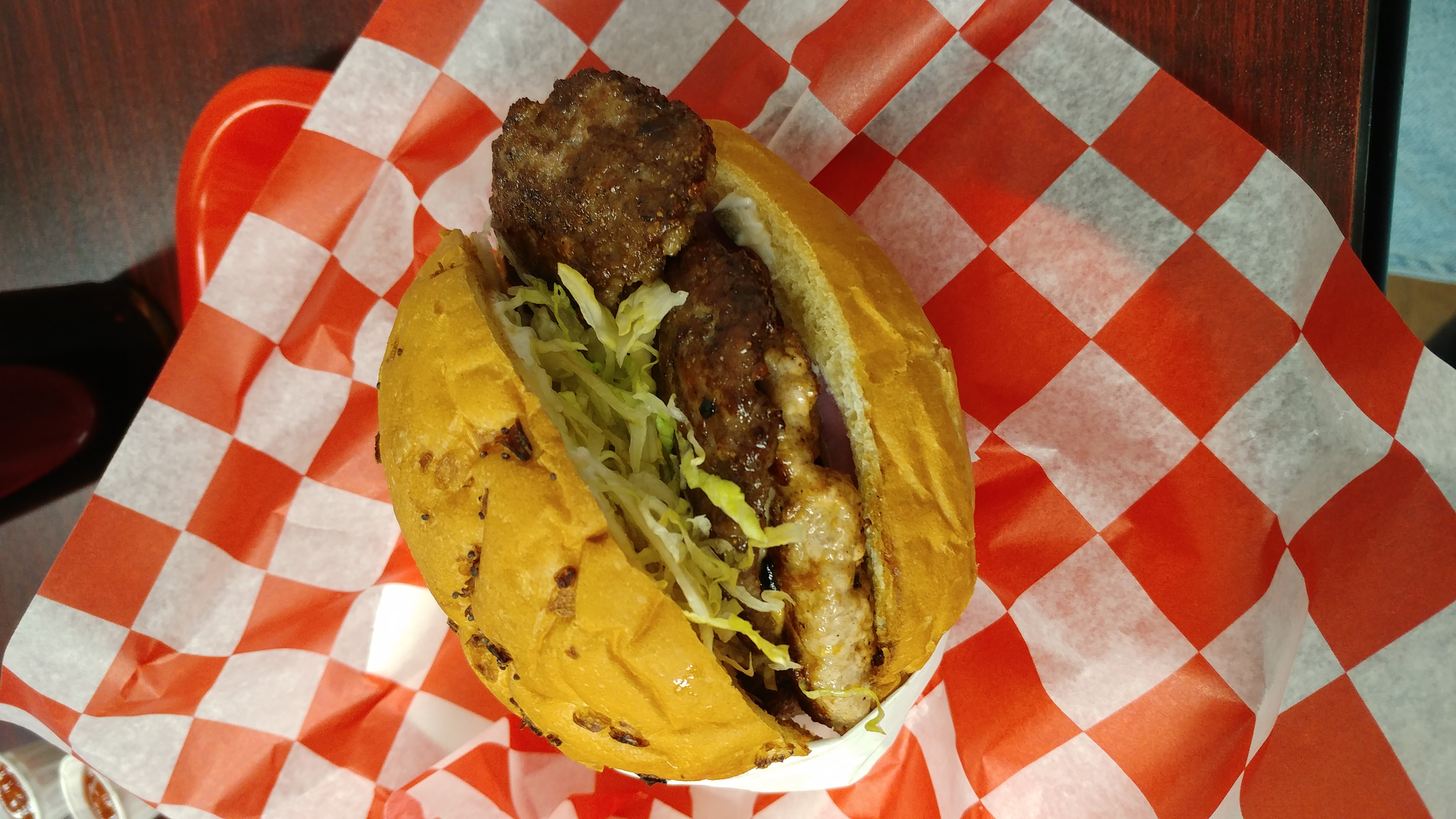 1 p.m. – Back to the hotel for more editing, and number memorization, and out my hotel window I start seeing players come walking back to the hotel from practice. There are hundreds of shops here, tons of history here, I can’t imagine the guys are too terribly bored.

4:30 p.m. – As I finish typing this I noticed we still have two and a half hours until dinner. More on that tomorrow.

Enjoy your Thanksgiving week. We will have more updates as the trip progresses.